You are here: Home / Fitness / Chin Up Vs Pull Up- How These Two Differ?

There are tons of fitness gurus out there, people with experience, knowledge, and a degree in fitness, and all of them have different styles and opinions about certain exercises. What remains constant through all if this disagreement is that chin-ups and pull-ups are the top training exercises. Universally, these are considered the best exercises but what about the difference between these two? If we are talking about chin up vs pull up, which one is going to win?

If you need to build your muscles or increase your bicep and tricep strength, these two exercises will work great for you. We can call it a test exercise that is performed to know if you have a certain level of strength or not. No matter what kind of work routine you are going for, it will always involve pull-ups and chin-ups in one way or another. Chin up vs pull up is a debate that doesn’t have a straightforward answer. If you want to know pull up vs chin up difference, you will have to get into the details. It will help you find which one of the exercises is better for you.

People fail to realize that pull up and chin-ups are two different things. They are similar to each other but certainly not the same. There are times when their names are used interchangeably and that is wrong. Both of them have certain pros and cons and that is the reason why not one of them can win the ‘chin up vs pull up’ debate. If you want to figure out which one will be great for you, you need to know about both of them and in what way they differ from one another. 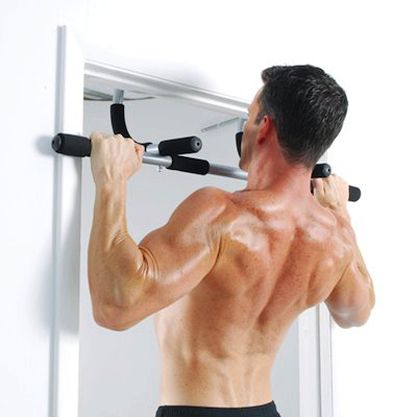 Pull up vs Chin Up- Difference in Grip

This is the most obvious difference that must be noted in the debate of chin-up vs pull up. The style of grip is totally different in both of the exercises. You use an overhand grip in pull-ups that is also called the pronated grip. In this grip, your palms are facing away from you and pointed outwards. The grip width will be a little bigger than your shoulders size. That means your hands will be slightly outwards from the position of your shoulders.

On the other hand, chin-ups involve the underhand grip, which is also called the supinated grip. In this grip, your hands are in the opposite direction as that of pull-ups. Your palms will be facing you and pointing inwards. Commonly, the width of your hand gap is equal to your shoulders. There are other variants if pull-ups and chin-ups that are not much talked about and they involve another type of grip, that is the neutral grip. A neutral grip is semi-supinated where your palms face each other. This type of grip was worth mentioning.

Get ProsourceFit Chin-Up/Pull-Up Bar from Amazon

Movement Difference in Chin Up Vs Pull Up

Apparently both of these exercises involve pulling yourself up and the target muscles are back and bicep, but besides that, there is a difference in movement. In pull-ups, your shoulders are adducted, and the elbows lower from the sides. While chin-ups use an extension of your shoulders when the elbow moves to the back and down. This type of movement is involved in a neutral grip as well. This difference is not a very big one but the impact can be drastically changed. If you choose the wrong exercise, it can make the situation worse. Both exercises train the same muscles but the way to do that is different. If you are someone who wants their workout to be perfect, we would suggest you not to ignore one exercise compared to another. It will also help you avoid any injuries by over performing the routine. So just don’t neglect one of them in favor of the other in the debate of chin up vs pull up.

Chin Up Vs Pull Up Difference in Strength

Your biceps are pulled strongly in chin-ups and that is the reason why people feel that their strength in chin-ups is more than pull-ups. Beginners find that doing chin-ups is easier for them and it is something that they start doing very fast as compared to pull-ups. If you have the strength to do 10 chin-ups in one go, you would be able to do 6 pull-ups.

Brittany Street is a freelance writer specializing in the healthcare industry. She has 6 years of experience interviewing leaders in fitness, writing about fitness and healthy lifestyle , and covering health care reform.

smarthealthkick.com is a participant in the Amazon Services LLC Associates Program, an affiliate advertising program designed to provide a means for sites to earn advertising fees by advertising and linking to Amazon.com.

***Amazon and the Amazon logo are trademarks of Amazon.com, Inc., or its affiliates.
As an Amazon Associate I earn from qualifying purchases.

Additionally, smarthealthkick.com participates in various other affiliate programs, and we sometimes get a commission through purchases made through our links.